The little castaway Iza who captured the hearts of thousands

This is a love story, about a helpless little creature who began life with the odds stacked against her, and has not just once, but twice defied fate and survived.

When islanders first became aware of her plight it was as one of the four raft puppies found in November 2016, by a group of island fishermen. Discovered floating miles from land south-east of Isla Mujeres, the fishermen are convinced the raft originated from Cuba.
When the men noticed the large raft drifting aimlessly on the Caribbean Sea, they could see something on board but couldn’t quite make out the shape of the thing. They decided to investigate as they were concerned there might be unconscious, dehydrated Cuban refugees on board. What they found was a scrawny dog.

Pulling their boat alongside they lifted the dog from the raft, and then as almost an afterthought inspected a pile of rags heaped on the makeshift boat. Hiding from the sun’s blistering heat were four badly dehydrated and sunburnt puppies, two males and two females. The men named the bone-thin mother Mama Chica and took the entire family to their fishing co-operative on Isla Mujeres.

One of the fisherman knew Eileen and Doug Regn, caring islanders involved with HALO (Helping Animals Living Overseas) an animal rescue organization. The man gave Mama Chica to Eileen to nurse back to health. Once Eileen saw the condition of the mother, she went to the co-op to investigate the health of the puppies. After a lengthy discussion in a mish-mash of English and Spanish the fishermen agreed to give her all of the animals.

Mama Chica and her babies were taken to the HALO funded Clinica Veterinaria de Isla Mujeres where Dr. Delfino Guevara, and soon to be certified DVM, Rossely Gonzalez gave them extensive checkups. Then it took a number of months to get the little family healthy. Eileen had to be careful how much medication she gave the fragile creatures. Besides dehydration, starvation, ticks, fleas and sunburnt skin they were infested with worms in intestinal colonies so huge the masses looked like baseballs when the dogs expelled the parasites.

As a nod to their seagoing adventure the babies were given “sea names” of Nimo, Sebastian, Dory and Ariel. When their health improved the babies and their mama were adopted by new families. Dory went to Washington State, Nimo and Sebastian to Minnesota, Mama Chica went to Cape Cod and the last one Ariel now re-named Iza was scheduled to go her new home in Denver.

And then life threw the little girl another fast ball, knocking her down yet again.

Her adopting family, Jason and Kelly Cooke plus their two boys, wanted to get to know her a little before she made the transition to her new country, new home and new people. The night before departure they attempted to take her for a walk in the area of Isla 33 condos. She panicked, slipped out of her harness and frantically raced away.

Devastated the Cooke family searched the neighbourhood, then called Eileen and Doug who joined the search. Heavy-hearted they flew back to Denver next day, without their newest family member.

In the meantime Eileen went into battle mode. She offered a reward for the dog, plastering advertisements and photos around the island. She posted the information on every Facebook group possible. She investigated over thirty sightings of comparable dogs seen at diverse locations all over the island. All similar in appearance, just not the right dog, not Iza. The family in Denver contacted her frequently asking for news, offering moral support.

As the weeks wore on Eileen persisted in her hunt for the puppy. “It’s an island, for heaven’s sake. She has to be somewhere on Isla Mujeres.”

Then recently late one afternoon, Monica MacPherson happened to be driving to her vacation home at the southern end of the island. She messaged Eileen that she had seen a similar dog near the Aguakan waste-water treatment plant on the eastern side of the island. Eileen waited until dusk and went to investigate.

A brown dog shot past, running flat out then ducking back under the thick undergrowth. Eileen showed her poster to the older man who is the live-in security for a property near the Aguakan plant.

“Si,” He agreed, demonstrating with his fingers that the dog’s ears often stood up tall, like those of a deer.

Eileen nodded enthusiastically, “Yes, yes. Iza.” Using her hands to mimic Iza’s large ears. In the past few weeks the man had left the dog a bit of food, so he was certain it was her.

Eileen returned carrying Iza’s dog dish, her favourite foods, and a blanket that smelled like her litter mates. Eileen also brought along two of her own dogs that Iza was comfortable with, letting them pee in various areas so that the little dog could catch their scent.

One evening she sighted the dog, and called her. The dog stopped, looked back and then ran. Another evening Daniel, an employee at the Aguakan station, managed to snap a couple of photos with his phone. Yes, it was definitely Iza.

Determined that she was going to entice the dog to come to her, Eileen dressed in thick jeans, a long-sleeved shirt as protection against nighttime invasion of mosquitoes. She wouldn’t use insect repellent worried that Iza wouldn’t be able to catch her scent. She rubbed cooked chicken on her hands, and set a food dish beside the gate of Aguakan. In the corner of her eye she noticed a dark shape crawling on her stomach towards the front of the golf cart.

“Iza.” Eileen called softly, and the dog launched herself into Eileen’s arms, crying whimpering. Iza squirmed and spun ecstatically. It was a struggle for Eileen to hold the dog. She managed to get a lead around Iza’s neck and set off home with the relieved pooch excitedly snuggling in her lap as she drove.

It had been a long six weeks for Eileen and Iza since the pooch had panicked and ran, a very long and stressful six weeks. At the house Iza barged into the yard, charging through gate to greet her housemates, Eileen and Doug’s collection of rescue dogs, all with their own interesting life stories.

Iza is a kisser. She kissed every dog, and the two humans many times to express her gratitude and happiness.

You would think that this would be the end of Iza’s story, but there are more and hopefully happier adventures ahead for her. Her adopting family, Jason and Kelly Cooke, are overjoyed that she has been found. It will be a few months before Iza can fly to Denver but her new family is eagerly waiting for her arrival.


And as for Eileen, she says it is heart-wrenching to let any of the rescue dogs go.

When she took Iza’s mom, Mama Chica to the airport their protracted goodbye in the cargo area had all the staff in tears. Mama Chica wrapped her paws around Eileen’s neck hugging her close.

Eileen said the dog was making a humming sound that jolted her heart with sadness. “I just can’t keep every dog we help. There is a seemingly endless number of pooches who needs our assistance and love.”

Eileen’s eyes were bright with tears, her voice thick with emotion. “Iza will be well-loved by her new forever-family. I have to let her go on to her next adventure.” 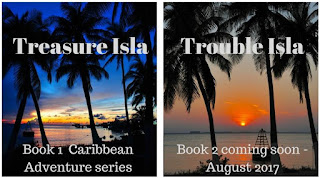 Treasure Isla is a humorous Caribbean adventure set on Isla Mujeres, a tiny island off the eastern coast of Mexico. Two twenty-something women find themselves in possession of a seemingly authentic treasure map, which leads them on a chaotic search for buried treasure while navigating the dangers of too much tequila, disreputable men, and a killer. And there is a dog, a lovable rescue-mutt.
at May 26, 2017

What a beautiful story the castaways....so so happy they found their forever home..thank you to everyone involved in their rescue...keep up the good work in the rescuing of dogs and cats...they need your help.
Linda and family of pets
Canada

What a beautiful rescue story Iza. So very happy that mom and puppies found a forever home.
Thank you to all who helped rescue these castaways...
What a beautiful moment. Keep up the good work in helping dogs and cats who need homes and medical care.
God bless you all....
Linda
Canada

Chapter 9 Life is good! What an exciting day. I played gently with my Christmas gifts because I didn’t want to hurt them. Tommy and Ch... 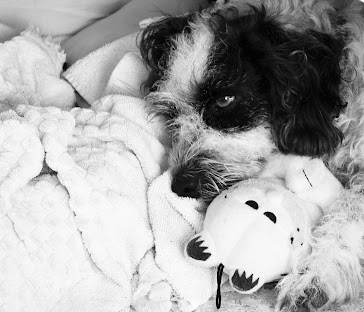 The Adventures of Thomas and Sparky 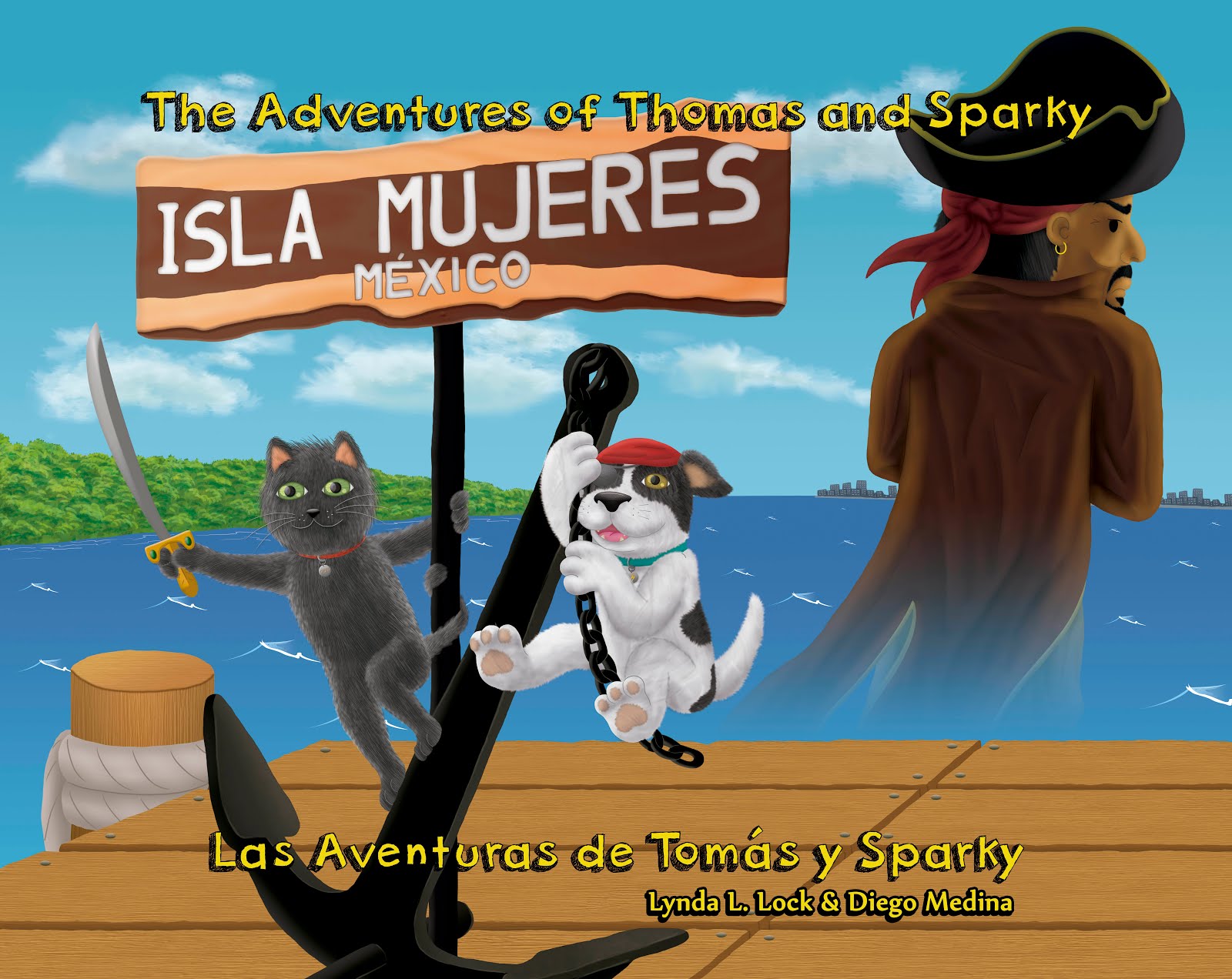 The Adventures of Thomas and Sparky/ Los Aventuras de Tomás y Sparky is a lively story about the friendship between a Canadian cat and a Mexican beach dog.

PAPERBACK AND EBOOKS AVAILABLE ON AMAZON 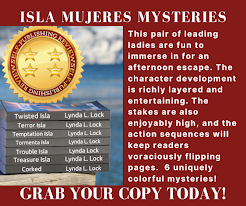 Revenge and Romance. Murder and Mayhem. And a hunt for pirate treasure on a tiny island in the Caribbean Sea. Join a quirky cast of characters and a lovable rescue dog named Sparky. 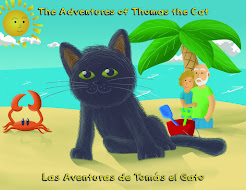 SILVER WINNER AT INTERNATIONAL LATINO BOOK AWARDS. Wonderful tool to teach children about another culture while learning a second language. Purchase your copy on Isla Mujeres at Jenny Penny Designs. EBOOK AND PAPERBACK COPIES on Amazon! Give us a try!